The new year has begun with the hope for supply chain that the things will be better this time. The year 2022 for the supply chain wasn’t easy, several protests and congestion issues took over the industry, causing economic issues. Apart from this, there was progress, especially in the category of ecommerce logistics. Here is the countdown of the highlights in the industry for the year 2022.

In early January, Omicron affected around 800 dockworkers on the ports of Long Beach, LA, which is 1 in every 10 workers. The productivity of the port reduced drastically by 20%, and the number of ships waiting on the coast reached to a record amount of 106 on the New Year Day.

The supply chain industry was yet to recover from the pandemic, when Russian-Ukraine war further affected its operations. The movement of oil, auto parts, and grain was affected the most, which created barriers in the operations. As a result of these changes, the prices were also increased.

Not only the trade, but some of the important ports were closed that resulted in higher ocean shipping costs. The ships were rerouted, the port congestion and shipping delays were increased. Moreover, the container shortage further added to global supply chain issues.

The supply chain problems caused many carriers the issues of blank sailings as the peak season curtailed. In comparison to last year’s February, this time the total capacity for the Asia and US West Coast was reduced by 13%.

After the Golden Week, the capacity reductions in Transpacific were expected to be 22-28% of deployed weekly capacity, which is the highest number since 2014.

Making the supply chain greener and sustainable was the top agenda of 2022, and Maersk, being one of the giants in the industry, didn’t disappoint. They entered many projects to make their supply chain operations green and sustainable. Some of the noteworthy projects were their Green Methanol Letter of Intent with SunGas Renewables, which helped them decarbonize the customer’s supply chain.

Another project was the one with Nestle Purina, in which both companies decided to make trains a more sustainable transportation mode from the factory to port route.

2022 was the year of labor strikes in Europe, which continued to disrupt the supply chain operations. Some of the biggest ones that affected the most were as follows:

10. FedEx Again Made it to Fortune’s Best Workplaces List

Ecommerce is an emerging trend for supply chain as more people are following the trend of online shopping. On account of this, companies have to stay up to date to ensure the best service quality for customers. This can only be achieved with hard working and happy workers. FedEx has proved it, which is why they again made it to the list of top 25 of Fortune Magazine.

FedEx is a big name when it comes to offering businesses transportation, e-commerce, and other business services.

In 2022, there were countless protests in China against the government’s zero-tolerance covid restrictions. This created a tough condition for the supply chain in the country. In the last year, China’s economy was expected to increase by 5.5%; however, the actual number was far below the expected.

Rail strikes had caused supply chain various issues throughout 2022 and US rail industry had similar crisis. The protests reduced the rail service drastically and caused delivery delays. More so, the crisis made the supply chain conditions even worse that increased the shipping costs and delays

7. Port Congestion Increasing in the US

Though port congestion problem was the prevailing problem in 2022, it accelerated in the US in November. For the US supply chain, as a result of these congestions, they experienced the largest financial condition decrease and contraction in a month. The inbound imports for the country fell to 17.5% in the year, which was then followed by a decline of 26% on the West Coast ports.

While supply chain operations were disrupted in 2022, many countries tried to compensate and transited towards greener initiatives. One of the highlights is the hydrogen import projects on different European ports. It included a German company, Hamburg; they are getting an agreement for large scale green import facility. However, they are not the only ones as similar agreement was also initiated by Nantes port in France.

Companies are continuously trying to make the supply chain more sustainable, and Amazon was successful in doing so. In 2022, they launched a supply chain software service, which will increase the efficiency and visibility of the supply chain operations. It will help businesses overcome the gap involved in raw materials and finished goods flow.

This step will be highly beneficial for small and mid-sized businesses.

AD Ports has been planning to expand to Mediterranean regions, which is why, they acquired Noatum Logistics in November 2022. The acquired company has 15 terminals in Spain as well, where they were handling dry bulk, general cargo, and RO/RO. This project is going to provide AD Port a better exposure to Mediterranean and Spain ports.

The deal will be closed in early 2023 after the approvals from regulatory bodies.

3. UAE President Inaugurated a Project of Of $1.1 Billion on Khalifa Port Expansion

To further solidify its standings in the region, a new project was initiated for Khalifa Port expansion, which will make it one of the important gateways to the largest markets in the UAE.

The total worth of the project is $1.1. billion and it will include Southern Berth Port, Logistics Zone, and Abu Dhabi terminal

Khalifa Economic Zone Abu Dhabi (KEZAD), which is a subsidiary of AD Ports group came to an agreement with an online marketplace noon.com to start UAE’s largest commerce fulfillment center.

The project will be completed in 2024 on a total area of 252,000 square meters. New technology for automation will be utilized, helping the local economy to grow even further.

X-ERA, a UAE based company took over the rising B2B commerce platform in Egypt, SPEED. It will help the company in digital transformation that will assist in connecting FMCG-related products with merchants, retailers, and soon customers.

Further, X-ERA plans to redevelop the market with the help of innovative solutions aiming to fulfill the retailer’s needs in several geographical areas.

Furthermore, the year 2022 was also a good one for Qafila. Despite the challenges in global conditions, we thrived and provided the best digital logistics services for our customers. We made sure our clients stay up to date with all the latest events for better exposure and opportunities. 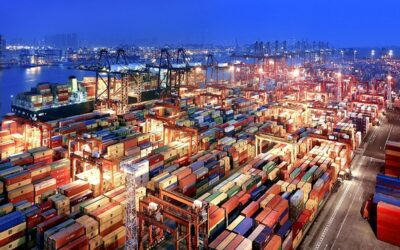